Autonomous vehicles, or AVs, will be the most disruptive technology to hit society worldwide since the advent of the motorcar.

This pronouncement by the team of journalist Karen Kelly and former New York City traffic commissioner Sam Schwartz is the sort of boilerplate futurism you’ll find written about any new technology.

Likewise, the very next statement could almost be chalked up to typical hyperbole: “Some futurists and policy experts even talk about driving being banned on some or all roads.”

What sets No One At The Wheel: Driverless Cars and the Road of the Future apart from that sort of replacement-level schlock isn’t where it looks forward, then, but for how it looks backward to show how a similar process already happened.

A century ago, the original grand theft auto was letting the car industry steal the roads from pedestrians and non-motorized traffic. Soon, driverless industries will be in a position to take the roads from the public entirely.

But only if we let them.

Many people like to make comparisons between horséd carriages and how they irrevocably gave way to the horseless ones, but this is the first book I’ve come across to make that comparison direct and examined in detail.

In a different book review, I argued that for all of the breathless adoration about the future of autonomous vehicles, we could achieve huge reductions in traffic fatalities by utilizing proven technology, which coincidentally has proven cost-benefit analyses already performed for it.

Although not the main target of that review, apartheid-era white South African and “rough-upbringing” survivor Elon Musk is as close to the platonic ideal of that position as you could ask for. Arguing that AVs would save many more lives than they’d kill, Musk has called journalists writing critical coverage of AV technology akin to murderers.

“[When] you write an article that effectively dissuades people from using an autonomous car, you’re killing people,” Musk said in 2016.

Yet, Schwartz and Kelly point out that Musk is not nearly interested in pushing mass (public) transit options or even installing more roundabouts.

“Roundabouts, or traffic circles, reduce fatal crashes by 70 to 90 percent compared to standard intersections, and injuries in crashes by 75 percent, according to the Insurance Institute for Highway Safety.”

But Musk doesn’t own a roundabout-installation company, so this method of saving lives is not morally compelling to him.

Perhaps just as importantly, we actually have some idea just how much it costs to install a roundabout, what it can accomplish, and can’t.

The civil engineer Justin Roczniak, known on YouTube as donoteat01, applied this criticism to Musk’s proposed underground Loop under the common engineering distinction between AM/FM, that is “actual machines” and, well, “fanciful magic”.

No One At The Wheel gives examples of other ways that so many promises of Autonomous Vehicles are already achievable if we changed our approach to road travel to something akin to air travel.

And for air travel, no failure leading to a loss of life is acceptable. The reason we don’t lose 35,000 people per year flying is that we know humans are fallible creatures and the system is designed around folks messing up without the result being deadly. Roundabouts—boringly—don’t involve engaging in elaborate philosophical constructions about which people tied to railroad tracks you’d have to kill in the case of a runaway trolley. But they do make it much more difficult for any “trolleys” to go out of control, which seems the better investment, all-in-all.

So Schwartz and Kelly lay out a convincing case for why technology will continue to develop to put AVs on the road but that this is a smokescreen for how the real benefits will accrue and who for. Algorithms can’t unionize, and new, privatized projects are by definition more profitable than maintaining or improving existing public systems.

Whether or not AV tractor-trailers actually make society safer is a moot question. They’ll get rid of a major fixed cost and point of friction for business owners, and with enough money spent on the right campaign contributions and good lobbying, anyone killed by the vehicle’s bad programming will be the ones blamed for putting themselves in danger. Or, it won’t be the fault of the company for releasing a vehicle that can be easily hacked and driven into a crowd; it will be the fault of the hacker, solely. 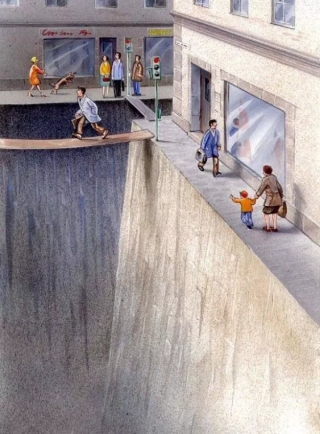 Again, the book really shines because it looks at the past and how all of this already happened as automobiles became legally privileged over pedestrians and other modes of transportation in city streets. It was not natural, it was not easy, but as the virally shareable illustration by Swedish artist Karl Jilg evokes, we surrendered a lot of valuable real estate to dangerous, pollution-belching machines that aren’t there most of the time, and don’t actually get people places any quicker once rush hour hits.

But it was what the automobile companies and associated industries wanted, and they pushed for it methodically with lots of resources behind them. In the name of progress, carriages no longer had to avoid people: people had to avoid the carriages.

I don’t think Schwartz and Kelly are being inherently alarmist or imagining a wild dystopia; the superhero film Logan did a fine job showing the plausible terror of sharing the road with AV tractor-trailers when it’s your fault for not having a new enough vehicle to drive you better. They also logically extend the present into a future where the inevitable UberLyft merger and its AV fleet are permanent zombie traffic because it’s cheaper to leave them driving aimlessly, available to pick up folks, than it is to ever pay for parking. In all likelihood, the cars won’t even solve Sudokus as they do it.

Technology is never just technology, and what seems inevitable with benefit of retrospect took tremendous cost and effort in the moment to be made just so and not different.

And yet, the authors provide you some cause for optimism. The United States is not a democracy, we know: we were set up to be a republic, like the Romans.

Our politics are not incapable of producing positive change, in any case, and we could really see huge improvements in the quality of life for everyday people if those are the goals we choose to actually and consistently advance. Schwartz and Kelly argue that if the Autonomous Vehicles are publicly owned, integrated into mass transit, and utilized only in situations where they make sense like long distance trips and last-mile for people with disabilities, then it could be a boon to people’s time and comfort.

But we have to be vigilant to see that solutions proposed based on new technology actually can do what they promise and without umentioned, externalized costs.

If you were an early 20th-century city dweller, getting rid of the danger fatal kicks in the head by a horse and the smelly pollution of manure on the streets no doubt would have made horseless carriages appear an attractive, safe improvement.

Which is the difference between Actual Machines and, well, Magic.