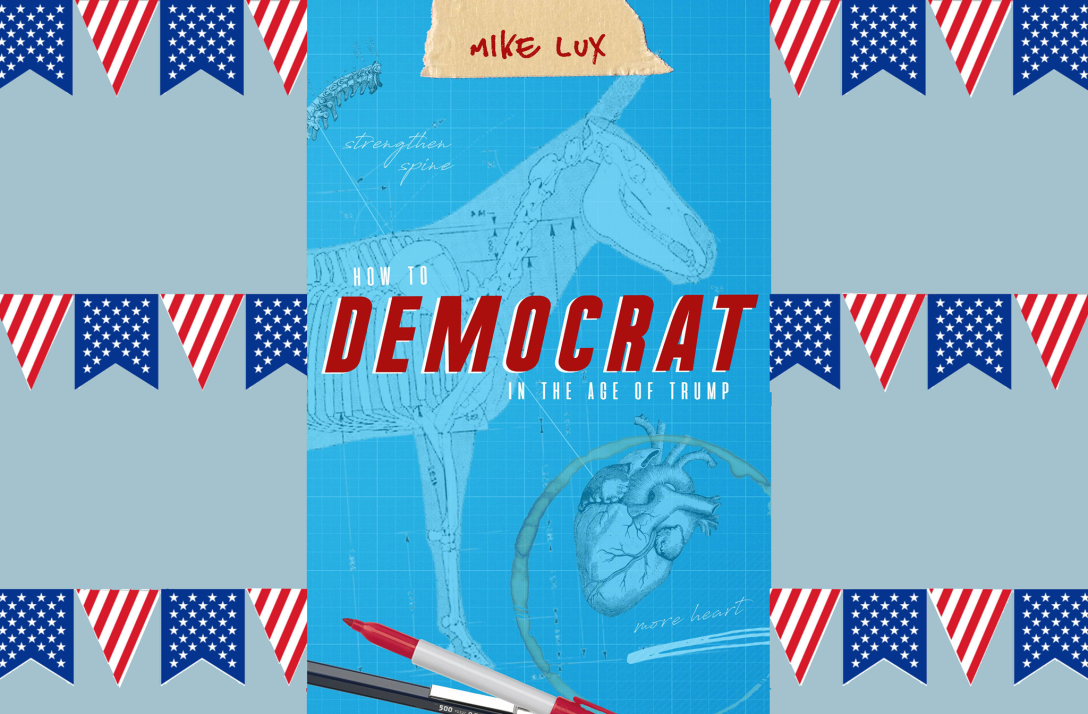 You always ought to be wary of any point of view you consume at length where you find yourself agreeing with it completely, where it anticipates every question that pops in your head and answers it, to the point that at the end you can identify no daylight between your thoughts and its own.

The effect is something like riding to the airport after you’ve doublechecked everything you meant to pack and finding it was actually all already there. There’s no rational reason for you to be unsettled rather than comforted, but somehow you are.

Mike Lux has a written just such a book: How to Democrat in the Age of Trump, and it’s worthy of being recommended to anyone on the Left trying to find a way forward.

A Bill Clinton administration staffer and founder of the national consulting firm Democracy Partners, Lux positions himself simultaneously as a Washington insider and grassroots organizer—with the implication that any critic who wants to can attack him for being the wrong one.

However, the argument he makes should be just as compelling to the vast pool of cynical campaign veterans as it is to community organizers concerned about intersectionality and pronoun-validation. The Left needs both sorts of people to be successful right now, and, reassuringly, people on the Left are increasingly both sorts.

“Broadening appeal” versus “unapologetic progressivism” is a false binary. Rather, the latter accomplishes the former.

Mark Twain accretes quote attributions like an ocean pier does barnacles, and one of the better of these to encrust on him is, “If you have to eat a frog, do it first thing in the morning. If you have to eat more than one, eat the biggest one first.”

In the context of political activism, it turns out that ignoring a subject you don’t want to talk about doesn’t mean it’ll be ignored, just that someone else will be controlling the conversation instead. Lux gives the specific example of Al Gore in 2000, letting the NRA be the ones defining his position on gun control for him across the South, which they did not do sympathetically.

He argues it applies more generally, too. In the prologue, Lux relates a study of countering a standard dog-whistle racist message with a race-agnostic, class-focused message in contrast with one that’s explicit about the need for ensuring everyday folks “whether white black or brown, whether 5th generation or newcomer” stick together against the corrupt politicians and rich donors who bought them.

Turns out, it’s more effective to lay all your cards on the table and talk about issues instead of hiding what you think will make someone uncomfortable even among whites.

We need to convince our people that we’re worth showing up for, but it’s convincing also to the persuadables that we aren’t mealy-mouthed or trying to get one over on them.

A lot of the people who support Donald Trump do so because they are morally repugnant dregs, enraptured by naked bigotry and authoritarianism. But Ted Cruz was also in the Republican primary, and part of Trump’s popularity-above-replacement was that he was definitely not mealy-mouthed. People don’t have to agree with a candidate about everything if they agree with and believe in a candidate on what’s most important to them.

Some late Bush-era apologism for the War on Terror tried to argue we should fight them over there so we don’t have to over here, which is a bad strategy for literal war but a good one for rhetorical positioning.

We’re accustomed to conservatives doing this in bad faith, using terminology we agree with like “protecting women’s health” as a strategy to restrict reproductive autonomy. But we aren’t willing to accurately frame our own priorities in, for example, the language of freedom. We’ve ceded that ideal entirely to Republicans who have re-defined that to be the “freedom to be an asshole”, in Lux’s words, something only truly open to cis white men with money. If you’ve ever seen a Libertarian meetup in person, this correlation is very clear.

The Left has allowed conservatives unchallenged dominance over concepts like “freedom” and “liberty” instead of talking about the much more direct emancipation of being able to change jobs without losing your health coverage or the freedom of sending your kids off to elementary school without worrying they’ll be gunned down by a completely legal battlefield-appropriate weapon purchased by a domestic abuser without any background check.

Again, we turn out more voters when we give them platforms worth caring about and fighting for rather than just reminding them how bad the alternative is. “Once upon a time” is a more effective tool than “thou shalt not”.

So an important part of that, Lux says, is reminding people how the Democratic Party has come through for them in the past. The Republicans are going to be out there swinging the stick, but we have to talk about the carrots of our movement’s accomplishments, too.

There was a generation for which Social Security, Medicare, rural electrification, the GI Bill, and the Civil Rights Act were synonymous with Democrats. Why didn’t we tell that story? We haven’t bothered to remind people what good Democrats can do once we get in office, or been brave about pursuing our ideals at the state and municipal level the way conservatives have every time they’ve gotten a state government trifecta. That’s part of why, right now, Republicans have 26 of them and we have 8.

There’s no reason the Affordable Healthcare Act should have required Republicans threatening to take it away for Democrats to care about it and stand up for it, but that’s partially on Democrats for not being willing to tell its story with more pride.

As Lux says, we have to be willing to go into rural areas so that we can connect with our people, inspire our people to show up. Low quality, expensive healthcare and underfunded public education are issues for rural white people, too. Yakima County, Wash., is a Republican stronghold and also plurality Latinx. Outside the oil booms of North Dakota and West Texas, women are half the population everywhere. Candidates have to suit their constituents, whether that’s Brooklyn or Kansas, but they ought to be doing it proudly everywhere.

It’s worth making the other side have to show up even if you only have a 10 percent chance of winning because if you do that 10 times, you ought to get one of them. Fighting is worthwhile even when we don’t win if it ensures we don’t ever lose.

Lux’s radical pragmatism is supremely motivating because he acknowledges the challenges in front of us are real but still surmountable.

That is, yes, clearly the Russian government attacked the Democratic Party and Hillary Clinton campaign in the 2016 election. Yes, Republicans were complicit in that attack and took the Roberts Court’s gutting of the Voting Rights Act as the go-ahead to disenfranchise as many minorities and likely-Democratic voters as possible. Yes, gerrymandering and small-state, rural bias mean the GOP as currently constituted has an inherent advantage leading to overrepresentation. Yes, the game is rigged, but it’s the only game in town, and even with all this, Democrats ought to be winning or pressing our issues so effectively there’s not even a fight to be had, like Nixon being the one to create the Environmental Protection Agency.

I would like to find something to criticize about the book, and I may have to make do with disagreeing with the validity of tracing the Democratic Party’s roots and central principles back to Thomas Jefferson’s Democratic-Republicans. I don’t think that holds up as historicity or is worthwhile as mythology. The prologue also ends up being about a fifth of the total, which is a bit much. And Lux is a Sen. Elizabeth Warren stan in a very noticeable way. But that’s literally all, so despite my paranoia at something being suspiciously this laudatory, this is definitely one of those “get a few copies to hand out to friends” sort of recommendations.

However, I want to loop back around to false binaries because Lux’s avoids another in an especially refreshing way, and it surprised me. He acknowledges the legitimate sources of white grievance without legitimizing or excusing their choice of expression in xenophobia and other racism. Lux makes a point of talking about “the working class” holistically rather than as code.

One of the most frustrating aspects of the Bernie Sanders-identified faction of the Left is the tendency to see racism or reproductive autonomy as mere distractions from the real economic and class issues rather than wedded to them. In pure, economic terms, nothing has a greater effect intergenerationally than racism. The capacity for pregnancy is a pre-existing condition that affects a person’s ability to pursue a career, manage their health, or keep a family at a size they can financially support. No one should have to choose between having health coverage and going somewhere every day where their boss sexually harasses them.

If you’re the stereotypical Bernie Bro, sure, the stuff that can’t affect you certainly is a distraction from stuff that does. But I think a necessary condition of being a Democrat, as opposed to an Independent who caucuses with them, has to be empathy for people whose suffering you won’t experience, either.

Morally as well as strategically, it’s good to give a shit, and we have a lot of work still to do all across the country to make sure some more of our better angels rule can the day than are just now.

1 thought on “BOOK REVIEW: “How to Democrat in the Age of Trump” by Mike Lux is a suspiciously good read”