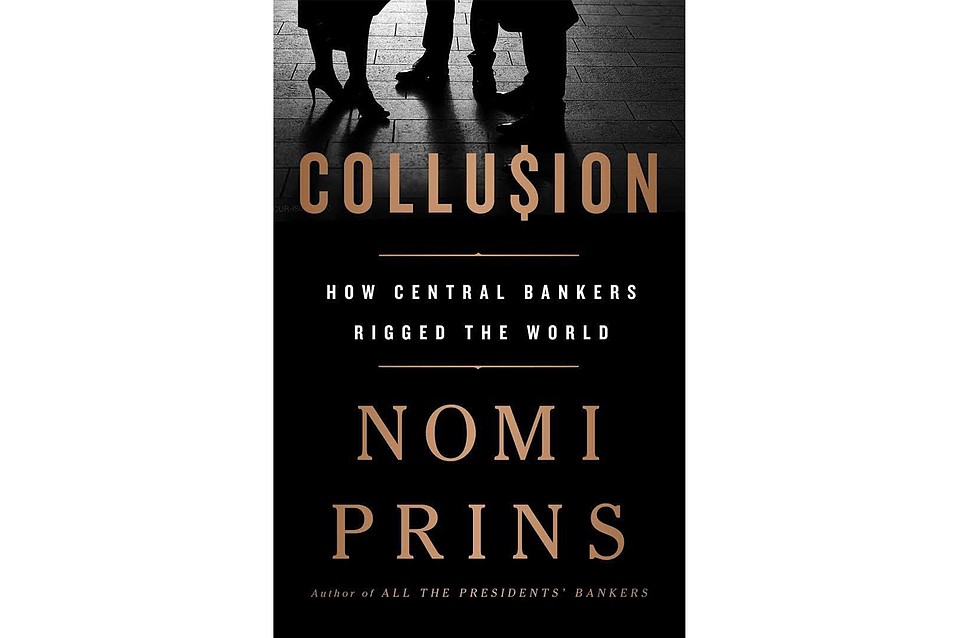 I didn’t think it would be possible to write a book that would make me feel sympathetic to central bankers around the world, but by the end of Nomi Prin’s “Collusion”—stylized, naturally, “COLLU$ION“—I admit, she’d done it.

This was not her intention. Prin’s main charge is an attractive one: that central bankers around the world, led by the United States Federal Reserve, colluded with one another in order to enrich those who were already the very wealthiest in society. To do this, they fabricated money to be pumped into the global economy through zero or near-zero interest rates, never bothering to address the fundamental, underlying problems. Because banks have been using all of their temporary, emergency measures consistently throughout the past decade, Prin says, they’ll have no other tools available when the next crisis hits, so it will be an even larger calamity.

As a senior fellow at the liberal economic thinktank Demos after a former life on Wall Street (her experience includes Goldman Sachs, Bear Stearns in London, Lehman Brothers, and what is now JPM Chase), Prins has abundant credibility to write this. The author traveled throughout North and South America, Europe, and East Asia as part of her research for the book, documented her sources with hundreds of citations per chapter, lists four pages’ worth of financial dramatis personae before even getting to the first chapter proper, and then adds a glossary at the end for good measure. She’s covering the complex and typically impenetrable world of international finance but clearly taking great pains to make it intelligible to a general audience. This is commendable.

However, Prin has a narrow fixation on one aspect of central banks that borders on obsession and due to that, numerous blindspots that severely weaken both her explanation and criticism.

When I was in middle school, I remember we were taught to write “chunk” paragraphs as an essay-writing technique. All of your body paragraphs were supposed to be CD-CM-CM, or a Concrete Detail sentence then Commentary, Commentary. I don’t know if they still teach it—I hope not—but Prin’s style approximates this. She is not a child, so there are many more concrete details than that ratio would suggest, and they are cited with dizzying thoroughness, but the uncited sentences still appear as pejorative commentary, usually only tangentially related to the factual statement immediately adjacent and, as often as not, they interpret each event as a sign of collusion or most commonly, “money conjuring.”

If you played a drinking game where you had to take a sip every time you read some variation of “money conjuring”, “conjuring money”, “money conjurers”, and so on, you would be in serious danger of alcohol poisoning even if you chose to go with kombucha. Literally, it averages out to something like one per page. The index lists more than 60 occasions, and it’s certainly undercounting.

Yes, I get it. This is her central criticism: that it isn’t real money and doesn’t have real value. Sure. But this loses much when at the end, we find out her prescribed solution is investing in gold, keeping cash under the mattress, or—and I’m not making this up—Bitcoin.

You can’t decry the wealth of central bankers on the one hand then turn around and say the better alternative is an environmentally disastrous libertarian fetish object with even worse wealth concentration, which apparently counts as real rather than fabricated money to her because producing it requires greater than consumed by the entire nation of Pakistan.

Of course fiat currency doesn’t have inherent value, but no one exactly hoards silver for its antibacterial properties, either.

On a similar note, Prin is much more bullish about China’s investiture in the country’s infrastructure without giving much concern to whether that infrastructure will ever be used before it’s torn down again or this has any salubrious effects on reducing inequality relative to the United States.

My sympathies toward central bankers grew when they received all sorts of blame that really isn’t on their shoulders. Prin wonders why in the U.S., we didn’t invest more in needed infrastructure improvements. There is a political answer to why stimulus spending wasn’t larger. Why did we repeal Glass-Steagall with Gramm-Leach-Bliley? Maybe post-impeachment Bill Clinton should have vetoed it, but there’s a political reason the repeal passed in the first place, why Dodd-Frank happened at all under Democratic control of government, and why it has been repealed under Republican control. Why didn’t we do more to help poor homeowners? There’s a political answer to that, and the reaction to even the idea of doing that famously sparked the Tea Party.

Prin is highly critical of these unelected bureaucrats making decisions about overnight interest rates, but what rock has she been living under where she thinks making a central bank head an elected position would cause there to be an improvement in any part of this or less beholden to venal plutocrats? “The call is coming from inside the House”—it’s called the Freedom Caucus.

One of the few politicians Prin does go out of her way to quote and speak favorably of is Vermont Senator Bernie Sanders. She definitely should have mentioned that she previously part of Sanders’ Federal Reserve Advisory Council and had been a surrogate for him during his political campaign, but their alignment seems natural rather than untoward. (Clinton would have been just as bad.) Therefore, she repeats one of the most maddening complaints from the Sanders campaign: that it’s the fault of the bankers and of wealth inequality for making Trump’s brand of populism attractive enough that white voters were willing to overlook his racism, nativism, and misogyny instead of those things being the central appeal. Black women experience wealth inequality; black women didn’t need to be lashed to a ship’s mast to avoid responding to a bigot’s siren call.

Now, I want to choose my words carefully because in no way did I read anything anti-Semitic in the book itself or have reason to believe Prins feels such. However, phrases like “central bankers that run the world” tend to be the sort of dogwhistle that people who put (((triple parentheses))) around Jewish names like to use. The call to break up the banks and have stricter regulations is obviously progressive catnip, but the characterization of a shadowy cabal of international financiers colluding with one another to further propagate their own wealth is more akin to The Protocols of the Elders of Zion, and tends to excite the Lyndon LaRouche fanatic or former Ron Paul, former Sanders, former Jill Stein, presently libertarian-socialist cryptocurrency enthusiasts.

Like Thomas Jefferson reading the New Testament and striking through the miracles to retain the more valuable teachings only, the detail and breadth of Prin’s work tracking the response to the financial crisis in Mexico, Brazil, Japan, China, the European Union, and the United States’ hand in all of it is worthwhile. As a reference to the timeline of post-crash banking, it is worth reading. But the interpretations in between are single-minded, repetitive, and not especially helpful.

Unless you’re not a specialist, it’s probably not worth it.