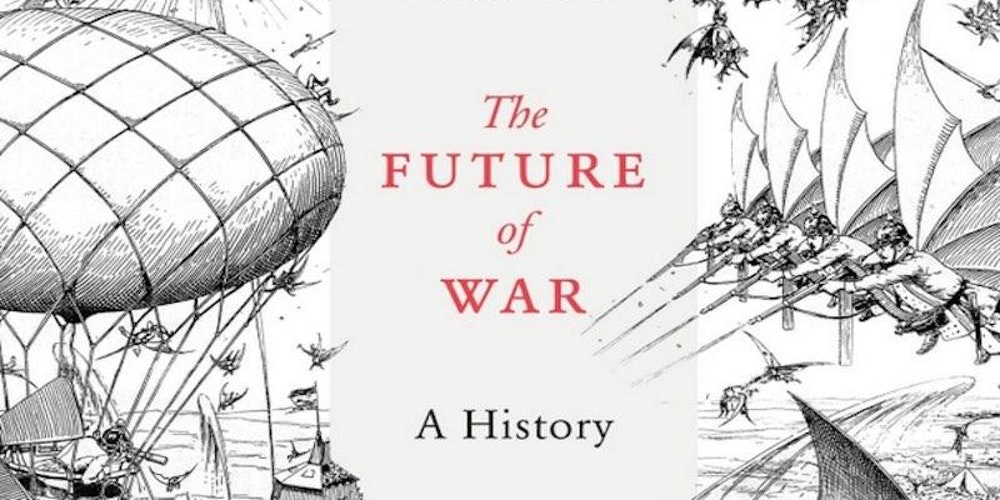 The saying “all is fair in love and war” has passed into platitude, but it’s true that with romance as well as bloodshed, we prepare for the next one mainly by worrying about the mistakes of the last conflict.

Lawrence Freedman’s The Future of War: A History is only about the more martial of the two human endeavors, but there’s a lot to love in it.

Across 287 pages of prose, Freedman’s book is part retro-futurism, part dissertation on the difficulties of determining what actually is a war and who died in one, and, finally, part looking forward at the sort of armed conflicts yet to come.

It doesn’t all fit together seamlessly, or read equally engagingly, but Freedman shows his homework regardless of topic, and there’s an additional 45 pages of notes and 28 pages just devoted to bibliography if warfare of the recent past, present, and future pique your interest.

For non-specialists, the most enjoyable portion is, thankfully, the first bit.

Retro-futurism is immediately enjoyable for the ways people in the past missed the mark. In Part One, Freedman piles up examples of how popular military-fiction authors and professionals in the late 19th and early 20th century imagined the next wars—and how they imagined it wrong. The Battle of Dorking by George Tomkyns Chesney in 1871 posited a rapid, successful surprise invasion of the British Isles by the German Empire; in 1902, a forethinking H.G. Wells imagined tanks before their invention but also thought war balloons would dominate the skies and submarines would kill their crews.

Freedman doesn’t give many examples of people who got their predictions right. There’s a short section on the Polish banker Ivan Stanislavovich Bloch who predicted in 1898 that an upcoming major war would favor defense and have soldiers relying on their spades more than their rifles, but acknowledging his foresight is the exception.

So Freedman picking out past missteps comes across a bit cheap when hindsight don’t need spectacles and when Freedman never, even at the end, goes out on a limb to make his own predictions. But, in terms of focus, that may have been a conscious choice based on the influence off-the-mark predictions had on decision-makers and the wider public.

And that is ultimately the most engrossing aspect of Freedman’s book and one I wish had been the whole subject. As much as some folk might sincerely like current students to be taught nothing but engineering or coding, art hugely impacts life because it shapes the imagination of the people living.

Geopolitics mattered in 1914, but so did a generation of books assuming the British and Germans would be on opposing sides of a future war. Nuclear technology and policy mattered, but so did Peter George’s 1958 novel Red Alert and Stanley Kubrick’s black comedy adaptation “Dr. Strangelove” in turning public opinion, including elite opinion, against the acceptability of a thermonuclear exchange between Cold War super powers. Ronald Reagan’s appreciation for Tom Clancy books and the Matthew Broderick film “War Games” had a real influence on U.S. policy in the 1980s.

A Cassandra is someone giving a warning no one heeds, but Freedman, in tone, treats people whose warnings were heeded as if they were inaccurate rather than persuasive as well as prescient.

The major problem, and the hardest part to slog through, is Part Two when Freedman goes into defining what war really is and how one ought to count it. This is not an unimportant subject; civil wars and sub-national entities inflicting casualties and deaths around the world are clearly not merely semantic issues, but in the context of this book, it’s a diversion, and a laborious one to plow through as a reader when sandwiched by the more interesting and imaginative prognostications.

In Part Three, Freedman gets into the difficulty of distinguishing where wars start and end when a U.S. military pilot can remotely kill someone halfway across the world and go home to their spouse, and an extremist group can use online networks to inspire their neighbor for a mass casualty attack. Moreover, is Afghanistan a different conflict than Iraq? Is Syria a continuation of events in northern Iraq or something distinct? Is it a civil war in Brazil when the government has lost direct control of large sections of São Paulo to criminal organizations and has to send in thousands of police and military members to retake it? What about in Mexico where violence related to the flow of narcotics north and attempts to stop it have led to an estimated 120,000 deaths? Is what Russia has done, assaulting democratic elections through online propaganda and sending organized “volunteers” into neighboring countries like Ukraine a new model for warfare or something peculiar to that nation?

These are interesting questions, but Freedman doesn’t definitely answer them or attempt to.

He brings up Paul Kennedy’s The Rise and Fall of the Great Powers as an example of a failed attempt to predict the future because, in 1989, Kennedy expected a weakening Soviet Union to last into the proceeding decades and Japan to rise in the 1990s, but Kennedy at least bothered to make predictions, and his larger thesis—that spending resources on military efforts to expand or maintain empire inexorably weakens it—doesn’t look so bad right now. Kennedy thought that the Soviet Union and United States would decline relatively while the then-European Economic Community and East Asian nations of Japan (and China) would rise because they didn’t have to spend as much money on their militaries. That has the potential to be embarrassing but also attempts to be insightful and predictive.

Freedman doesn’t have this courage, and it’s a shame because he might have synthesized the second section into something worthwhile and forward-looking had he been braver. His thesis, such as I can tell, is that people are often wrong when they attempt to predict the future, and that’s terribly boring.

So if you’re a history buff, you’ll enjoy this and learn some things, and have the notes to follow all sorts of rabbit holes. But if you’re not already interested in such stuff, and even if you are, you won’t walk away with a clear statement or idea of anything except what you already know: the future is blurry and always tough to foretell.