HUMAN 1
The simplest reason is when you consider the initial disruption, pay differences, and to an extent social expectations it becomes relatively more expensive. This accumulates with more children — even if you have a stay-at-home dad, the mother is still going to pay a substantial cost for each birth.

Whether that happens in aggregate, I don’t know, but it certainly explains some of the effect.

I’d bet that the number of women who can support a family solely on their income is fairly small. The average woman makes about $150 less per week than the average man.

Women make less than men at essentially every occupation. Some of that is due to sexism of the sort that women advocating for a promotion or higher pay are seen differently than men doing the same; women in leadership positions are judged more harshly than men, even in studies where they’re actually men but the participants are made to believe they’re women. But that can’t explain everything because it’s also so in occupations like public school teacher which involve regular raises on a schedule with little or no wiggle room for individual bias.

So that likely goes back to the differences in biology, where women have a much narrower reproductive window than men do. And because of historical social gender imbalances that we perpetuate even now, it’s much more common for a 40-year-old man to have a 25-year-old wife than the reverse, and trophy spouses in general are much less common for women to acquire than men, in part because people look at an older woman marrying a brainless piece of fuck candy as something scandalous while for powerful men, they’re almost expected to trade their wives in once they stop being young and attractive enough.

I wouldn’t be surprised, also, if some women who become stay-at-home moms do so because they got pregnant while a teenager or otherwise without finishing their education, and it’s much simpler for men to avoid having to live with or be legally responsible for a child, and men are still able to earn much more with a high school diploma or less than women are, even if that’s shrinking.

Combine all of that and even if a woman might at some future stage in her career be wealthy enough to support her and her husband on her income, at the age where she’s able to safely have children, that’s less likely to be so. She also has to have the sort of job that won’t punish her for taking time off to continue the human race, or won’t assume that because she’s had a child, she’s less valuable as a worker than before. 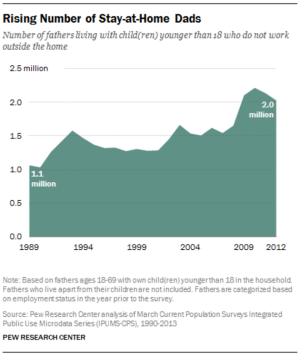 It’s really not surprising. Women are still expected to be the primary caregiver, to sacrifice their earnings to spend time with children, and stay at home dads are a weird oddity, sometimes celebrated for doing what millions of women do by default, but usually men are expected to have an identity as a worker. At an office party, wives are supposed to be addendums to their husband and maybe go off somewhere to talk about kids or gossip when the men start to talk shop.

This is still changing, but culture doesn’t change overnight and the expectation remains much closer to a literal patriarchy in a family unit.

Fathers are 16 percent of all stay-at-home parents, and of all mothers, 29 percent of them are stay-at-home. And if they’re raising children because that’s what they want to do, that’s great, just like if they’re working because they want to, it’s great. But other factors are feeding into the dynamic to make it skew the way it does.

HUMAN 2
These are all good points but if I people tend to marry other people of equivalent attractiveness and career success (roughly) even in the upper classes, iirc men trading wealth for a young attractive spouse is actually extremely uncommon, and statistically happens mostly among low-achieving lower-status men.

I’ve heard of studies like this, but I wonder about a couple of things. First, attractiveness tends to be different for men than women. ‘Dad bod’ was an acceptable description of a certain kind of active, but also lazy and beer drinking, man considered to be good-looking. Other than Lynx, I don’t think many men are into a Mom bod, given the preference. Guys have a lot less work to do and the features considered handsome tend not to be youth but maturity.

Relatedly, we have the age difference. A young spouse that’s 20 years different, sure that’s rare. But more than 15 percent are between 6 years and 14 years apart.

I think ‘trophy spouse’ can come across as a pejorative, but someone who is a 38-year-old at a company starting a relationship with a 26-year-old in the same company is not likely doing so because they enjoy being challenged intellectually. The older person probably is more established in their career, and if it’s a guy, you’re grading him on a curve. George Clooney’s gray hair, wrinkles, and flabby torso don’t disqualify him from being an attractive man; being 55 doesn’t make him a (Grand)Dad I’d Like to Fuck for anyone.

Definitely, class matters, and having similar professional circles is what causes many relationships to start. But age differences greater than college freshmen to seniors for almost a third(!) of all marriages is going to bake in a lot of imbalances in physical attractiveness and career success at that point in their lives, even with all other things being equal, which they probably aren’t.

HUMAN 2
I vibe with most of that, but I think its worth pointing some things out:

First of all, if you’re married to someone significantly older than you, that person is likely to be significantly less attractive, less wealthy, and less smart rather than more.

Also, people have looked into the idea of the beauty-status exchange and find that couples tend to match on those traits:

I’m not saying that marriages with age gaps don’t happen, just that statistically it doesn’t happen much, and when it does, it’s more likely to be a sign that the higher-age partner is too lacking in some quality to attract an equivalently successful and equivalently attractive person.

I can’t read either one of those beyond the abstract, but again, age gaps are something like the norm in marriages if a third of them have the man four or more years older involved, then about half are within three years but still skewed toward men, and only 8 percent are women being notably older.

If I’m understanding you right, you’re saying that the concept of a trophy wife is what is more of a myth, or at least an exaggeration. Is that right? Because I can’t see how they’re defining stuff like close in age. Four years isn’t that far apart age-wise to most people, but in a career it tends to be a large difference, especially people in similar or related professions.