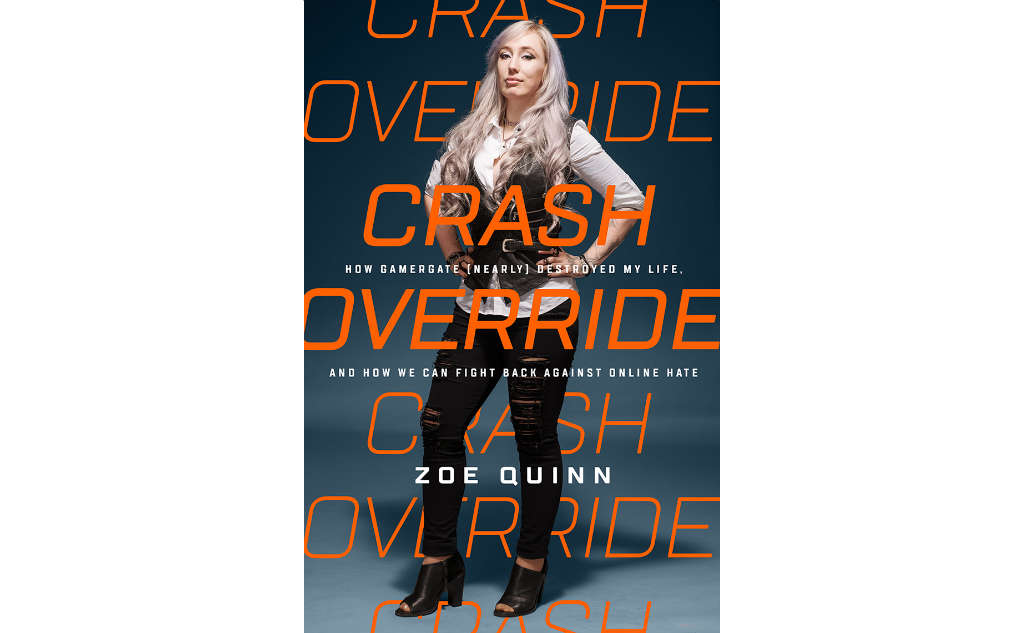 In response to the recent Buzzfeed article about behind-the-scenes goings-on of Milo Yiannapoulus’ and Breitbart’s racism laundering, Washington Post journalist Philip Bump said, “An early chapter of every book documenting the Donald Trump era will be about Gamergate.”

If so, Zoë Quinn’s book Crash Override will be cited by nearly all of them as the autobiography of the person most affected by Gamergate and how she’s worked to defend everyone against online mobs since.

Quinn had first gotten widespread attention as a video game developer in 2013 for her text-based “Depression Quest“, an interactive representation of what it’s like to experience depression when you seem capable of making only the worst and most unhealthy decisions instead of any good ones. It was unique and creative and earned some positive write-ups. Then, in 2014, Quinn’s abusive ex-boyfriend went online to smear her reputation and accuse her of sleeping her way into any good reviews, so a group of people—but mostly angry young white men—began a sustained campaign of harassment, threats, and stalking that targeted people—but mostly Quinn and other women—in a movement that became known as Gamergate.

Quinn’s Crash Override: How Gamergate [Nearly] Destroyed My Life and How We Can Win the Fight Against Online Hate is really something more like four or five books, and it’s not exactly a criticism to say that each might have been a full work in their own right instead of portions of this fairly brief 238-page one.

The first of the sections is an autobiography of Quinn, growing up in rural New York, on the edge of poverty and sometimes falling over it. If you were born between 1982 and ’92, and especially if you’re from a small town, Quinn’s description of what it’s like to be part of the last generation to remember life without the Internet, surrounded by people who don’t care about what you do, then suddenly be able to find communities sharing your niche interests, is intensely resonant. There was a freedom in it, too, because the Internet around the turn of the century was a place without history or fixed identity. When you closed the window on your desktop computer, the people ceased to exist, and, to them, so did you.

The second book-within-a-book is about Quinn’s life after she made a game that was fairly popular, and after her ex successfully weaponized nerd-culture misogyny against her. By then, the Internet had become a place where people existed online much as they did in the world. The experience of being at the center of an Internet mob is something most people born in the past 35 years are all aware of and vaguely fear. Awful or merely embarrassing things you did when you were 14 or 24 or said while inebriated now are potentially archived and might be used against you, where—in every generation prior—they would have been ephemera. Quinn lays out in the first portion of the book that she’s an actual human, subject to the same hopes and frailties as any other, but when the angry mob targets her for harassment, they do so with the expected threats of sexual assault and sending examples of her previous modeling to potential employers to shame her.

Quinn, despite not deserving such abuse, was better equipped and determined than most at responding to it. The next section of the book goes into how she determined to solve the problem of online abuse, documenting the activities of people conspiring against her, and her attempts to utilize a legal system poorly trained at addressing new forms of abuse. That experience—hearing police officers say they couldn’t do anything because the threat was made by someone in a different county or a judge suggest getting off of the Internet entirely as a solution—led Quinn to found an organization to help make it easier for others to navigate the process of dealing with online abuse and harassment.

Some of that involves responsible individual practices (“hygiene”) to prevent people from being able to get into your accounts easily if you are targeted. Some involves working with nonprofits and lawmakers to have better legal recourses and resources than exist currently. Ultimately, though, Quinn imparts her discovery that the larger problem involves those inside of tech companies being themselves unwilling to solve eminently solvable problems. Facebook, Reddit, and Twitter are staffed by the same sort of angry white males who are entirely capable of automating copyright infringement takedowns or visible nipples but claim nothing can be done about specific, detailed rape threats or exhortations of genocide because free speech is sacrosanct. Toward the end of the book, Quinn looks at what this coddling has allowed that to grow into.

People have to gradually build their courage for dramatic action. Domestic violence is one of the few common threads connecting men involved in mass murder, even when ideology and method are vastly different. Whether gunman, bomber, or truck driver, whether Democratic Socialist or religious fanatic, they tend to work up to it with the kinds of abuse regarded by society as low-priority and therefore safe for them to first practice.

Steve Bannon saw the potential in the sort of people—but mostly angry young white men, in his words rootless white men—who could be brought into a movement by first attacking vulnerable people on the Internet over video games and sci-fi culture. He saw the potential in organizing such people into a political force who could behave the same way in a more meaningful sphere to even more corrosive ends.

Quinn wasn’t surprised by the election of Donald Trump as president because she had already felt the speartip of a movement driven nothing more than the hatred of anyone expecting to be treated with equality. There aren’t more of those people than decent people, but there are enough of them, and they’ve been properly activated and motivated to be harmful.

Zoë Quinn understands Gamergate better than anyone, and you should read “Crash Override” if you want to better understand the primordial pools that nurtured juvenile, petty misogyny and racism until it could be brave enough to enthusiastically spread Russian propaganda for the Trump campaign and demonstrate in public. They were a figurative torch-wielding mob lighting up their keyboards with “ironic” hatred and doxing before they could be a literal torch-wielding mob, actually chanting Nazi slogans and assaulting people.

But, you should also read it to understand what can already be done while we live with a form of intimidation and harassment that never could have existed until now, and what we still need to do to as a society to stamp it out entirely.

1 thought on “BOOK REVIEW: We’ll be reading Zoë Quinn’s “Crash Override” to understand the Trump era for decades to come”