HUMAN 0
I mean, maybe it’s actually this. To some extent, I understand that the underlying message is that “these people are angry” and that the use of “white male” as a scapegoat is just “the easiest tangible target for anger.”

However, when I feel specifically targeted, I can’t help but feel like it is in my personal self-interest to actively undermine movements that use this sort of rhetoric.

Assume for a moment reincarnation does exist and when you die, you’ll be reborn as a human again.

Without any guarantee of what your demographic characteristics would be, what sort of society would you want to live in?

I’m a white guy. I have a drawl. If I lived in South Carolina, even if I were quite poor (as I’d be likely to be), I’d have a guaranteed social position that placed me above other people. That feels nice. But if I didn’t have demographic guarantees, there’d be a 60 percent chance I’d be black and therefore a slave. That sort of society doesn’t have very good reincarnation odds versus one where people are able to have access to quality public school regardless of their ancestry, have comprehensive health care even if their parents actually were too lazy to get a decent job, and so on.

Generally speaking, no movements are demonizing the being of a white male, just that by being a white male, you are able to inherit all sorts of nice things everyone ought to have, and because you inherit it without asking for it or having to think about it, you almost certainly do lots of things you’re not aware of that are rude, offensive, or actually harmful.

Other people can be critical of a system that produces such results and be irritated at people who are insulated from the negative effects and often claim those effects don’t exist, aren’t really a problem, etc.

Hiking 10 miles can be legitimately exhausting, and you might feel like you’ve accomplished something by getting to the top of a summit first, but if other people around you are having to do it with backpacks that include 50 or 100 pounds of rocks, and they’re complaining that not everyone has to start their hike with pounds of rocks weighing them down, the response is not to feel attacked but to help attack a system that loads people down so unevenly to start with.

I think that’s the moral and empathetic argument. The practical one is that you want as much as possible for people to be able to contribute to society based on merit rather than arbitrary limitations. Thousands of Ramanujans went to their graves as ignorant slaves, laborers, and untouchables over the centuries, and it was a great waste to humanity.

If you are an aristocrat, if you are an Afrikaaner who doesn’t want to have to compete with colored labor, there’s a narrow and short-sighted interest in maintaining your position by shoving some other group below you. But for the overall development of the human race and our total, mutual happiness and success, having a society that does not try to prevent so many able people from having full rights and privileges is the better choice.

HUMAN 2
This is the kind of long masturbatory BS that says nothing and has screwed over the left ever since identity politics took precedence over treating people based on who they are as an individual person.

Like, what are you even trying to say with this in a practical way? All you’re doing is throwing up a big “history lesson” to “educate” us, but you’ve not actually given a point to it outside of “some people are assholes who don’t think of how their words and actions affect others”, which while true, does nothing except allow you to feel smug about basic truisms.

Increase income taxes to levels that were normal in the ’70s or ’80s, have a more robust inheritance tax to limit intergenerational wealth transfer, invest in programs directly designed to counteract policies like redlining, make long-lasting birth control free, remove discriminatory taxes on products like tampons, have a separate federal division of the Justice Department to investigate police brutality and police involved shooting cases rather than local law enforcement and prosecutors, etc.

There’s all kinds of specific stuff to do, a lot of it that will benefit poor white people, as well. But the question ‘would you rather be rich or poor and white’ is a fallacious question because for very obvious historical reasons, if you’re not wealthy, you’re also much more likely to not be white.

For black Americans in particular, even if racism were to completely disappear, even if tomorrow we all woke up and looked racially homogeneous and spoke the exact same dialect, you’d have the legacy public and private discrimination impacting people for at least the next 100 years without some reparation made. 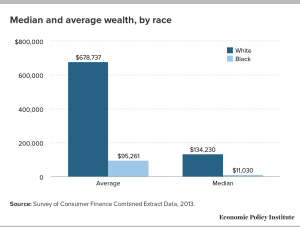 If your great-great-grand parents were denied land of their own or the fruits of their labor through slavery or sharecropping; if when your great-grand-parents moved into cities, they were prevented from joining unions or some occupations entirely; if when your grandparents saved up and tried to buy a home in a better part of town they were denied entry because the neighborhood charter said explicitly you couldn’t sell or rent to Negroes; if later, your parents were legally allowed to but no bank would provide a loan and no one would sell to them directly even if they had cash-in-hand; if after some blockbusting, real-estate agents scared enough whites to move away so they could re-sell the same houses to black people at marked-up prices but depreciating value because a black population is officially undesirable and public school funding comes largely from housing prices; then you would go to a school of much worse quality than a private or otherwise majority-white school and be a severe disadvantage just based on that.

This is a huge relative burden, and it’s a direct result of intentional policies, both by governments and private entities.

If Jeff Bezos’s mother had been black, her family wouldn’t have had any property wealth. If his step-father had been black instead of a white Cuban fleeing Castro, I don’t know if he’d have been allowed to attend college and become an engineer at that time. (The college I went to in the Southwest instructed would-be black students to say they were Native American or ‘Latin’, but Texas law was stricter about segregation.) Without the family wealth Jeff Bezos was able to draw on, he never would have been able to get Amazon started, facing no other discrimination personally.

In addition to that, you still have active discrimination happening where two black or Latino people getting in a fight in school are much more likely to be suspended or even charged with felonies compared with white peers. As everyone knows, drug usage rates between groups differ much less than arrests for it, the harshness of sentences, and so on.

I don’t agree with Thomas Sowell on a lot of things, but his imagery of economic achievement as a relay race is a good one, and wealth captures that much better than income. Income might be how fast you’re running your leg, but wealth is what sort of lead or deficit you have when you’re handed the baton, and present discrimination is wind resistance or worse.

1 thought on “‘As a white male, how can I be sympathetic to movements that demonize my being?’”