Continued from racism and inequality.

HUMAN 1:
I think there is a misunderstanding on what the inequality with college is. It isn’t the cost. There are scholarships and people of color have easier access and thanks to affirmative action often easier standards to get in. The money isn’t the problem. The problem is affirmative action, scholarships, whatever, don’t do anything because they don’t address the problem of why they need to curve downward to increase enrollment in the first place. Which is impoverished environment. It is that they started out poor that put them behind. By the time college rolls around it is already too late. If we legit want to help poor people and minorities we need to get them out of poverty. The current system is useless.

That’s part of it, sure. We agree. And attending schools with the materials and funding to provide quality education, and being in a socio-economic life situation where you even can focus on doing homework instead of other concerns. Yeah, this is an issue that’s over-determined, absolutely.

But specifically with wealth, there are not nearly enough scholarships available that will cover the cost of tuition, books, housing, and other living expenses at a quality university.

In 2009, a representative survey of American households revealed that the median wealth of white families was $113,149 compared with $6,325 for Latino families and $5,677 for black families.—IASP 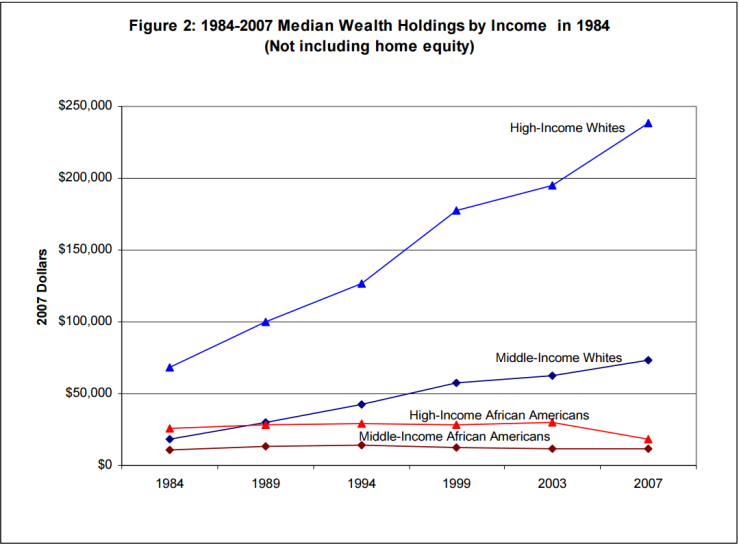 It’s a bit harder to get loans because of direct racism but also because even if you hid the name and identifying info, the echoes of systemic racism would make it more difficult (more debt, less collateral, lower credit score, etc).

So even if all forms of prejudice had actually disappeared in 2008 at the election of Barack Obama, the effects would not disappear for at least 100 years, including college admissions.

HUMAN 1:
Those numbers are completely ludicrous.

You’re quoting income, which is entirely different from wealth. I know that’s subtle, but it’s important.

Meanwhile, we can get into the idea of a model minority, but let’s start out by saying that ‘Asian American’ is an extremely broad term, and even South Asian to Southeast Asian to East Asian is massively different. Chinese-Americans are doing better as a group than Cambodian-Americans.

And I would offer to you that the lessening of certain forms of racism is a big reason why they’ve been allowed to be successful. Chinese Americans weren’t any less committed to education or hard work in late 19th and early 20th Centuries, but they were forced to live in ghettos, prevented from attending most schools, had no right to testify against white people in court, and so on.

To the question of why this changed, I don’t have a good answer. The Japanese Internment camps of the 1940s and seizure of their property seems like the high-water mark but last expression of that vein of hatred. It could be the geopolitical situation changed, making Chinese then Taiwanese, Japanese, and South Koreans important as global allies, or it could be that after 20-plus years of heavily restricting immigration from East Asia, they were not longer seen as an existential threat to the purity of the white race. I don’t know.

But I’d argue to you the idea of white supremacy over black Americans has been more central to Southern identity than anti-Chinese or other East Asian prejudice ever was to the West Coast, and that’s part of why the latter died out with time while the former continued to have people shooting at integrated buses, assaulting children who tried to go to white schools, and miscegenation laws enforced up until the 1970s.

HUMAN 1:
I am sorry but your argument is so detached from reality that I just don’t want to continue. I know you spent a lot of time typing all that. But I would rather talk with people who use facts to make an argument instead of feels. You have some good stuff in there for people who are into that kind of thing. At no point does any of it attempt to address why I said poverty is the issue and not cost of college. I mean you are doing a nice job trying to have an entirely different argument I guess. Just not for me sorry. You can feel like you won if you would like though. I am out.

People do often talk past one another. I’m sorry if you felt like I’ve done that to you, and we seem to agree more fundamentally than we disagree.

But I think your inability to recognize the difference between wealth and income ought to be a red flag for you and your worldview.